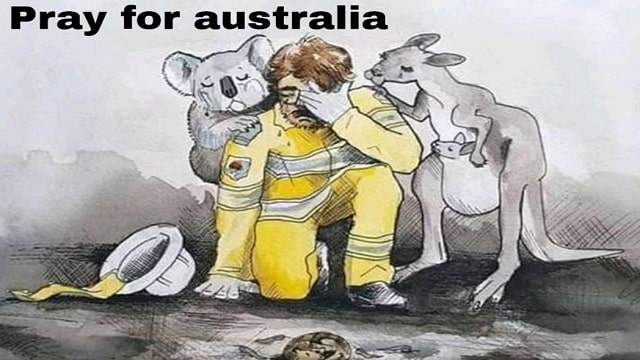 After the deadly blazes begin, most of the forests ravaged, people left their home and fleed. But what about the animals and the ecosystem ?
The larger ones managed to run, but the smaller one’s suffered the losses. It is estimated that over 480 million(48 crores) animals, birds and reptiles were lost.It is the biggest loss in 120 years of record in Australia. In today’s world we cannot bear this is repairable damage.Australia has a rich biodiversity, with nearly 8% of all Earth’s plant and animal species finding a home on the continent.

The permanent effects of the tragedy was very disturbing, many of the footages show people rescuing koalas, kangarus and many other animals, these were some of the very sad videos to watch.
The most saddest part was they were burnt alive, or injured because of fire. The numbers are very scary. as many as 8,400 koalas have already perished in the fires in New South Wales alone. WWF reports says that 10 million hectares of Australia as Land have been burnt.
When the forest fire happens small insects and other biodiversity like microflora and other microorganisms they just die because of the heat, it takes much more time for them to repopulate. or even several years.

Pros and Cons (good points and the bad points)

there are no pros and cons in this, the cons repairable, but if we look at the pros , peoples equality and helpfulness was tested, it made people to come together, for this and upcoming threats. It made people responsible, and more aware towards nature.
In the process some of the worst decisions were taken by the Australian government in which the conclusion was made to kill 10,000 camels because they drink lot of water, Is this a solution?🤯😡
continued…
-By Mihir Ponkshe
Share

Where are Honey bees now?

THE PERPETUAL VICTORY OF WATER

15 thoughts on “Australia Bushfire: The Truth and the Falsehood (part 2)”